“All human beings, as we meet them, are commingled out of good and evil: and Edward Hyde, alone, in the ranks of mankind, was pure evil.”

Robert Louis Stevenson's masterpiece of the duality of good and evil in man's nature sprang from the darkest recesses of his own unconscious – during a nightmare from which his wife awakened him, alerted by his screams. More than a hundred years later, this tale of the mild-mannered Dr. Jekyll and the drug that unleashes his evil, inner persona – the loathsome, twisted Mr. Hyde – has lost none of its ability to shock. Its realistic police-style narrative chillingly relates Jekyll's desperation as Hyde gains control of his soul – and gives voice to our own fears of the violence and evil within us. Written before Freud's naming of the ego and the id, Stevenson's enduring classic demonstrates a remarkable understanding of the personality's inner conflicts – and remains the irresistibly terrifying stuff of our worst nightmares.

Strange Case of Dr Jekyll and Mr Hyde is one of the most famous pieces of English literature, and is considered to be a defining book of the gothic horror genre. 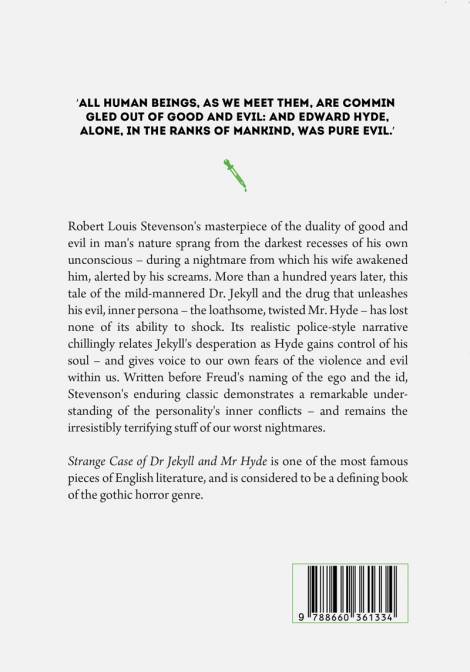